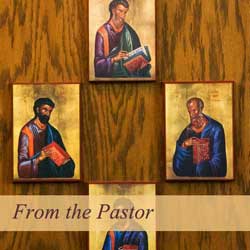 Funerals and Eulogies: Though this has been discussed in a previous bulletin and in Today’s Catholic, it continues to be an issue; that is, the Diocese’s (Bishop’s) directive to us regarding eulogies at funerals. I asked our Diocesan Office once again for the guideline that ALL parishes are to follow. Admittedly, I have bent the rule by allowing the occasional request for a eulogy, but always with the guidance that it must be reasonably short (we’ve all heard those that go on and on!)and, since in church in the context of Holy Mass, that they focus on how the deceased lived their life of Faith (not about their love for ND football or the Cubs, or Saturday night poker games, or the many other things that some want to tell about at such moments). For the most part, eulogies (several usually) are the bulk of non-Catholic funerals, since they have no Holy Mass, the perfect prayer for the deceased as well as the bereaved. Homilies too, should always focus more on the hope that comes from Our Lord, the resurrection promised to the faithful, than an attempt to
canonize the deceased by eulogizing them. We’ve all heard eulogies that are so “glowing” of the one who died that the people in the pews are wondering if they are at the right funeral: “Could this be Joe they are talking about?” Concern over eulogies within Holy
Mass began as long ago as Bishop D’Arcy, and his presence at the funeral of a fallen police officer wherein one of the fellow officers gave a long eulogy telling of the weekly poker parties, the boozing that went on, and in language used that would make any of us blush. Bishop then said, “No more!” But, when reasonable, I’ve still bent the rule since I feel at times it can be helpful for those grieving. Mine is to be there for them and help them and that has been true in my entire 41+ years as a priest. So, here, once again, is the Diocesan guideline for eulogies that we are all told to follow (as pastors): The option for “speaking in remembrance” is one with profound implications for reverent liturgical practice at Catholic funerals. The Order of Christian Funerals allows for an individual to speak in remembrance of the deceased during the Vigil (OCF#80), funeral Mass (OCF #170), or funeral liturgy outside Mass (OCF
#197). The Distinction between “Speaking in Remembrance” and Eulogies ~to “speak in remembrance” means to give a brief reflection on the life of the deceased in the context of his or her life of faith. Any remarks made should revolve around God’s action in the life of the deceased, and how His blessings have enriched the world through that life. We might recall the words of St. Augustine: “When God crowns our merits, He does nothing else than crown His own gifts.” These words of remembrance are not the same as a eulogy, which is a reminiscing and toasting of the life of the departed outside the context of faith. While meaningful in its own way,
such a tribute has no place in the sacred liturgy: the Order of Christian Funerals notes that there is “never” to be any kind of eulogy (OCF #27, 141).Recommended Times and Places for Reflections Due to the difficulty often encountered in ensuring that elements of eulogies are not conflated with liturgical words of remembrance, it is preferable that all such reflections take place outside of Holy Mass. Suggestions might be: at the funeral home the evening before, at the luncheon that may follow, or after the committal service if
finished at the burial. ~Fr. John